The zombies crashed into the house.

The family was gathered around the television, watching. None of them moved.

The zombies scratched their heads. The parents were staring at the screen. The children’s mouths hung open.

“No brains!” the zombies moaned.

And moved on to the next house.

So a lot of you seem intrigued by the contest, judging by the traffic on the Pig Latin contest page. But not enough writers are submitting.

It could be that you’re all a bunch of procrastinatin’ scribblers, or it could be you feel that $20 dollars (the prize for the winning entry) doesn’t go a long way in today’s economy. If the latter is the case, then allow me to point out a few things you could purchase with this kind of money. They include, but are not limited to:

a vending machine smorgasbord, 5 happy meals, a slightly broken television, a night in a hostel, and this.

* If you are keen on any of these exciting possibilities, here’s a refresher on the rules:

Write a humorous poem or flash fiction in Pig Latin. Try not to exceed 250 words (we will consider anything under 500 words, though). Submission deadline is on Sunday, August 31st.

Contest is free to enter.

Here’s a handy how-to-write Pig Latin guide in case anyone needs a refresher.

Best poem/flash will be published on Back Hair Advocate.

We’ll also send the winner a crisp $20 dollar bill in the mail.

The car rolled up to the curb and stopped. Bob quickly hopped out and walked around the back side of the car to Catherine’s door. She smiled to herself, touched by the small act of chivalry, blissfully unaware that Bob was using those precious seconds to release gas pressure that had been building to dangerous levels over the last four minutes of the drive. He allowed the breeze to carry his flatulence away and then opened the door with a cool smile. She took his hand, extending lovely legs onto the sidewalk, and exited the car. Bob closed the door and pulled out his phone.

“Now watch,” he said, tapping at the screen. “The app tells the car where to park and how long to wait based on the time of the movie.”

Catherine snuggled in close to his body and peered at the screen. “That’s so cool!” she said.

“Yeah,” Bob said. “You can even instruct the car to park in the shade. The solar panel on top will trigger the car to move to a different spot if it’s sitting in direct sunlight for too long.”

“What time is it?” Catherine asked. “Are we late?”

He tapped his screen, selecting the option for shade, and the self-driving vehicle pulled away and made its way toward the parking lot. Bob couldn’t help but smile as he saw Catherine’s beautiful legs leading the way into the theater. She was always so frisky during these midday matinees. They hurried through the glass doors and into the air conditioning of the large building.

Bob’s car, a brand new 2021 Nissan Soulare, wound its way around the hot parking lot. Sensors and GPS signals guided it safely along as it searched for a suitable spot of shade. But in every place, the solar panels indicated direct sunlight. It exited from the lot and drove itself down the street.

The car moved easily down Franklin Boulevard, rounding a sloping bend that led around a park. Two teenagers, well into their first experience with LSD, watched the driver-less car pass by. One saw the car as a UFO that split the sky open like a sheet while the other knew with absolute certainty that the vehicle was an orb of pure light coming to restore all that had been lost from humanity. The sensors of the Nissan Soulare found no appropriate places for parking and moved on.

Further downtown, traffic snarled around two lanes worth of construction. A hefty man, resting his ample belly on the handle of a jackhammer, spat on the window of the car as it passed by. “That’s for my brother, you piece of shit! He used to be a cab driver!” The Nissan Soulare sensed the foul discharge of moisture and began to spray its own windshield and activated the wiper-blades. The eyes of the hefty man went wide as he accidentally drove the jackhammer into his big toe. He fell to the ground in pain, and the car moved on.

The vehicle pulled into the vast parking lot of a Stuff Mart and began searching for shade. On the other side of the lot, another Nissan Soulare was doing the same. They scouted the lot like sharks following a faint scent until they both closed in on the same spot. The two vehicles simultaneously turned in, then, sensing the other’s proximity, stopped abruptly. Servos wound up and down. Sensors scanned and signals pinged. On a server based in Silicon Valley some seven hundred miles away, two sets of logic collided in an endless battle of zeros and ones for the final spot of shade.

Shawn Van Tol is an amateur writer who is secretly training to become a lazy man. He hopes to one day conquer the literary world with books so that he can quit his day job and never wear pants again. More of his stories can be found here. 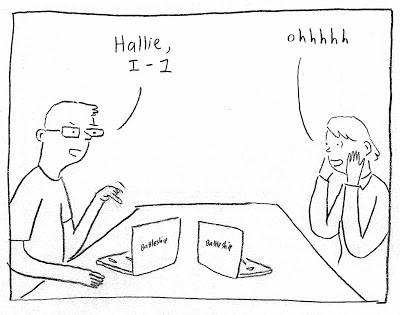 I’m not actually wearing this dress by Hallie Bateman

All natural hairpieces for men by Hallie Bateman 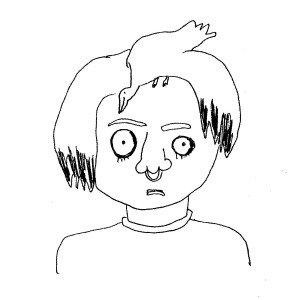 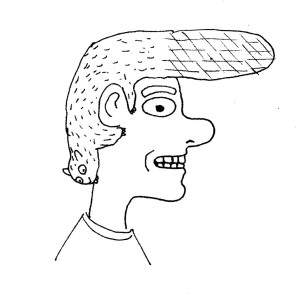 The Sad Person’s Club meets once a week

in a cramped church basement

It doesn’t matter why you’re sad

We make an effort not to judge

When we asked her to elaborate

she told us to back off

and flashed her teeth

But it’s up to you whether you want to talk

The only rule we have is that you be sad

If you smile even once

perpetually mopey-faced Bruce will escort you to the door

and then you leave

One of our longest running members

once got a call mid-meeting

that his daughter had been born

Bruce came to him

but informed him that he had to leave this instant

and told us so

so he was invited to stay

Then two of our members admitted

and they were asked to leave

It was all very complicated

and not particularly sad

which is our business.